In the late summer/ fall of 2017 Frontier was contracted to rebuild/restore the Independence Headframe outside of Victor, CO. The Independence was partially disassembled and rebuilt, both in the air and on the ground. Using cranes and man lifts, Frontier personnel reassembled the structure, to look and stand, as it had for almost 125 years. The project was successfully completed, and the headframe once again stands at 105’ tall. 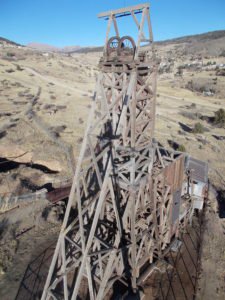